Play with the Atlantic 10 on NBA 2K

How to set up:

Step 6: Add any teams you want from the Divisions (list below)

Step 7: Go to "Setup Options" and put in the following:

Step 10: Download a team's design by going to "Team Relocation > Download Team Designs > Search Username "SBUnfurled" for Atlantic 10 teams or "SkillazKill" for others. Again, the full list of college teams is below. Bookmarking my username will also make things easier.

Step 11: Scroll through other teams by flicking the right analog stick right or left.

Step 13: Go to "Save As" to save another file, if you'd like to play the season over again. (Optional) 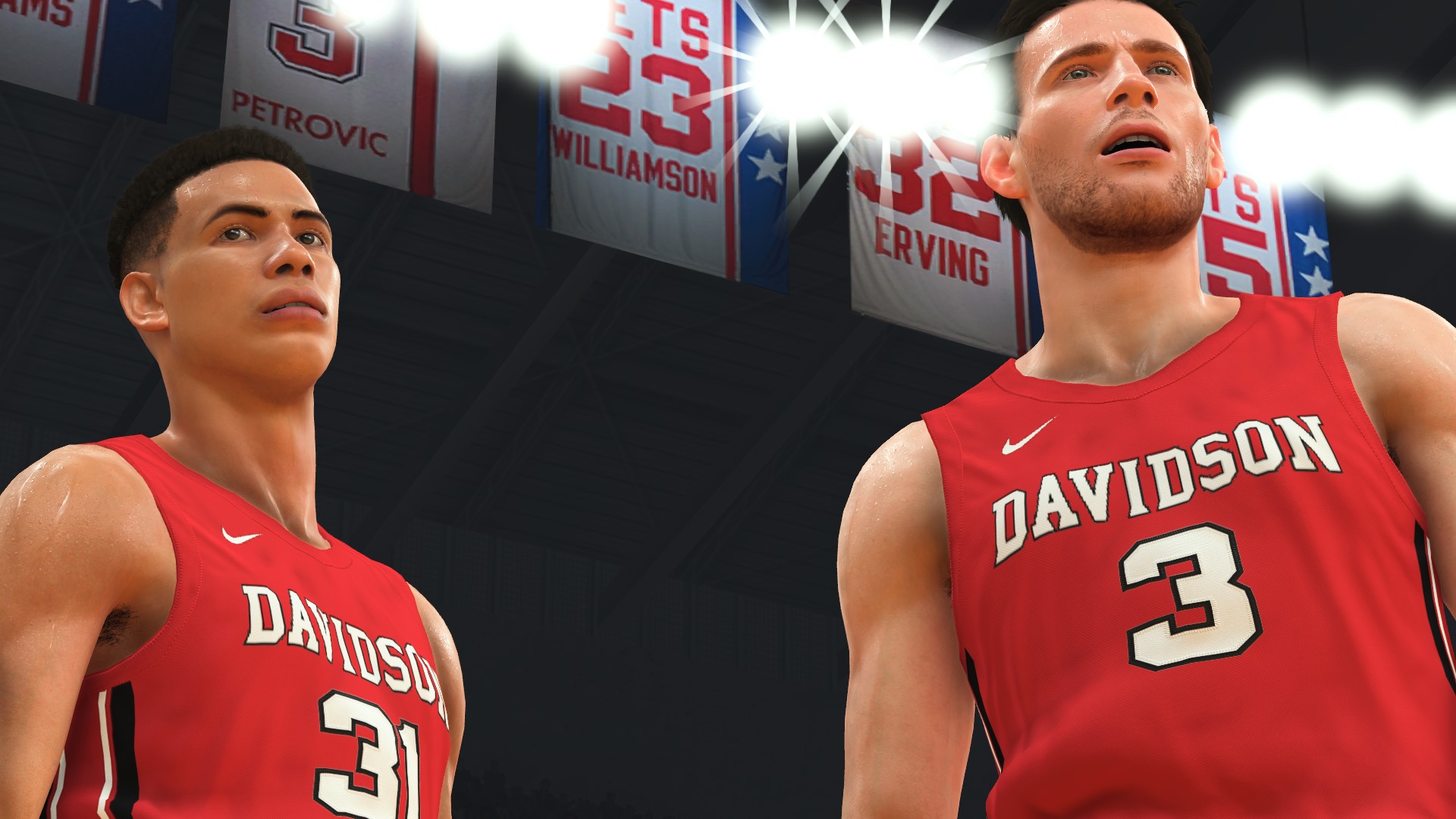 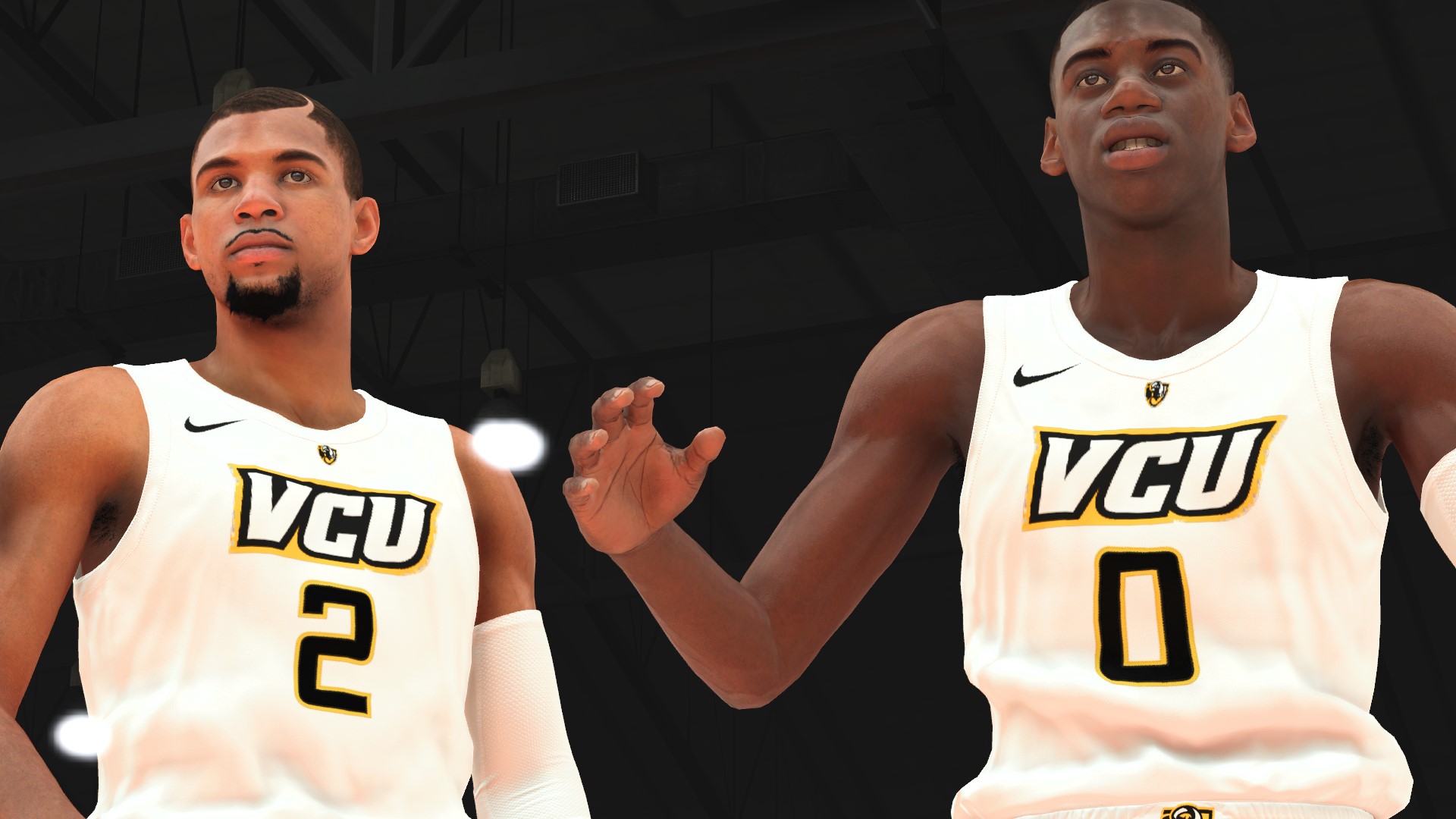 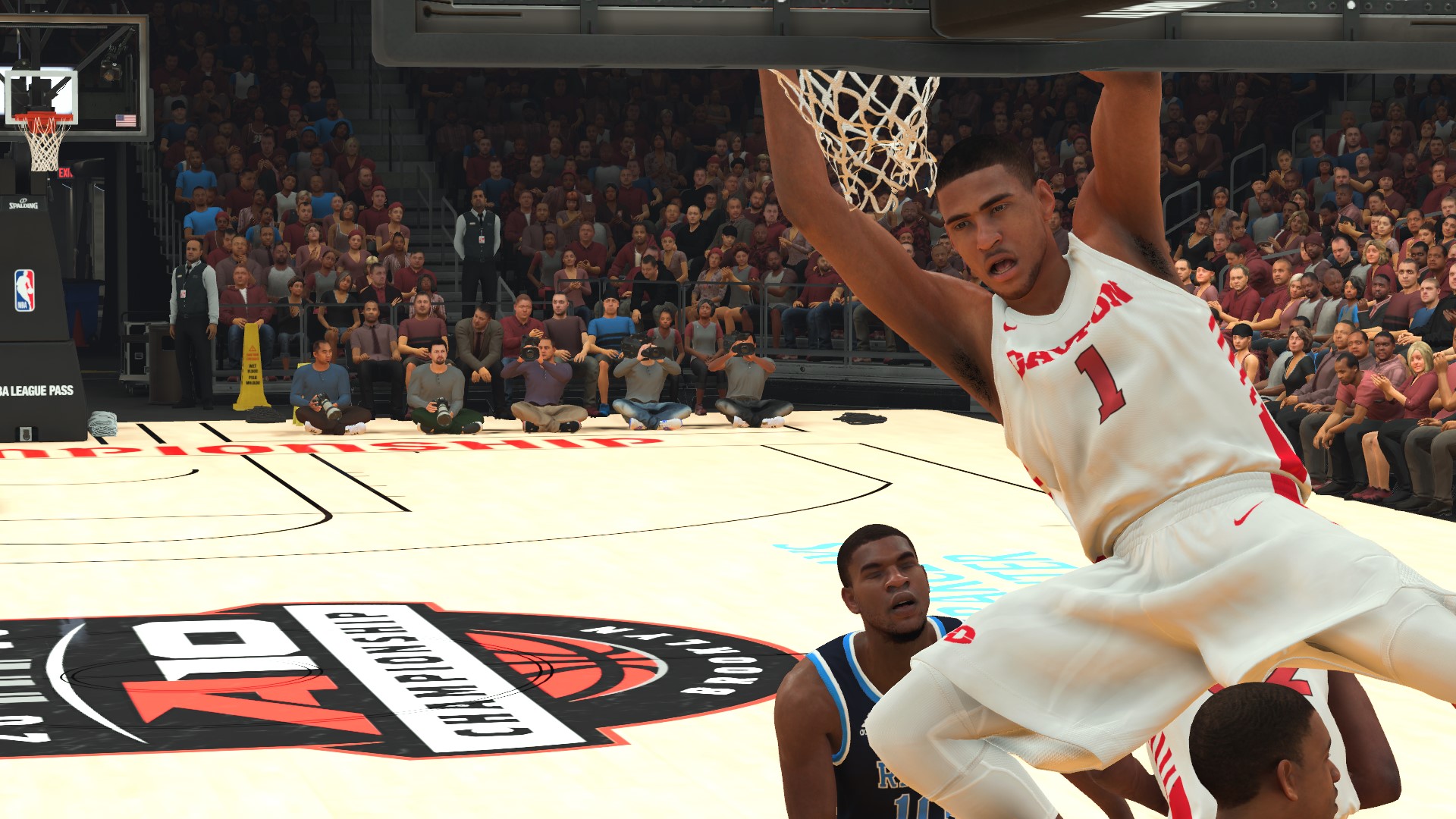 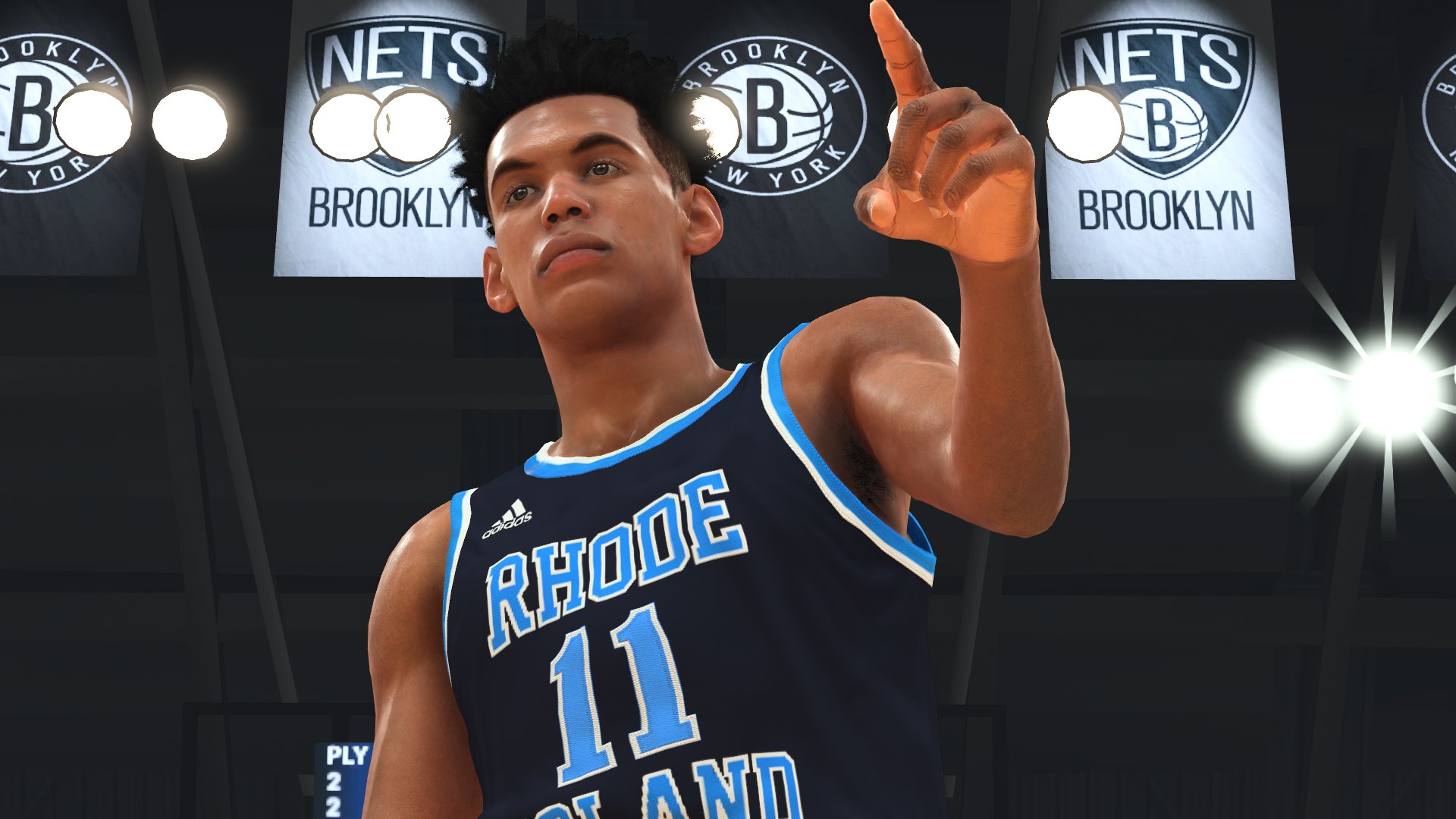 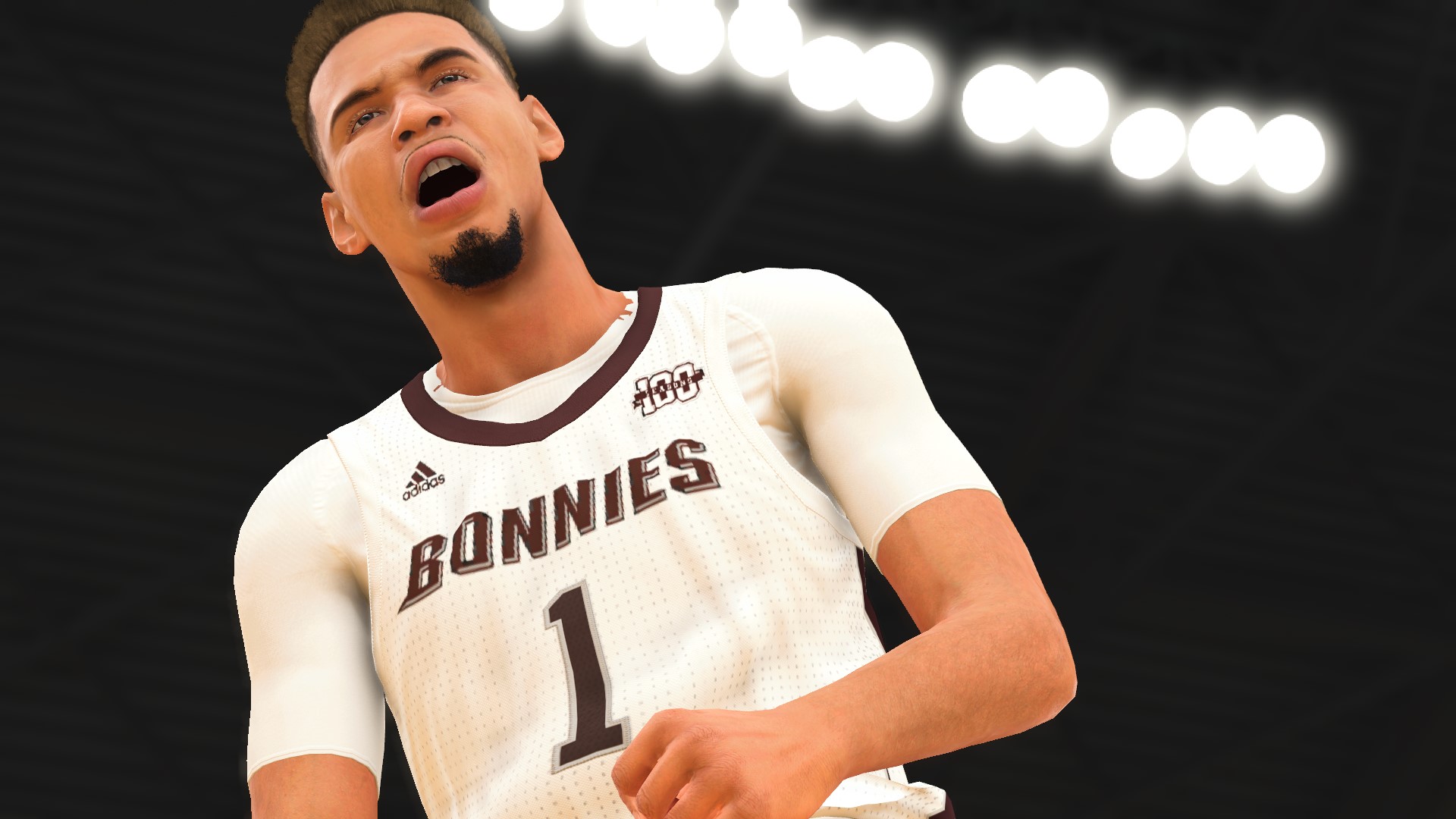 The uniforms. Home, away, and alternate uniforms can be customized with great detail. Number fonts won’t always be perfect, but the uniforms achieve authenticity. I've created all uniforms for Atlantic 10 teams, and also included other colleges under my username (SBUnfurled). Find many more under username "SkillazKill", and be sure to bookmark these usernames for easy access when relocating your teams.

The courts. Many of the courts look close to what you see in real life. The A10 logo can’t be placed in the lanes and large full-court shadowing like you see on GW, UMass and SJU’s courts can’t be done, but almost all other details can be achieved. The combination of realistic players, courts, and uniforms makes for a very visually appealing experience.

Most arenas. The larger NBA-style college arenas look very good, with realistic seating arrangements, jumbotrons, scorer table graphics, seat colors, and more. These are implemented for Dayton, Duquesne (PPG Paints Arena), George Mason, Rhode Island, and Saint Louis. Other arenas have been modded into the game, with a large college-sized lower bowl arena used for UMass, Richmond, Saint Joseph’s, and VCU. A much smaller modded arena is used for Fordham and La Salle.

I also included home uniforms with a 2020 Atlantic 10 Championship court at Barclays Arena, which looks excellent in the game.

You'll have complete control of your roster in MyLeague. You'll be able to set lineups and allocate player minutes or a rotation timeline to your liking, as well as put into effect your own offensive and defensive styles. You can set up your own plays for each player, and have total freedom as it pertains to your game plans. Coach appearances were selected from a database of over 200 face presets, so some look okay and others don't look much like the coach (including Schmidt), but coach attributes, badges, and styles can all be customized.

What’s not so good:

Games can only be played in MyLeague mode where the team relocation option is available. This is still an NBA game modded into a college game, so certain things will happen that don’t make sense or simply don’t fit the college structure. Announcers will welcome you to Toronto for a Raptors-Nets game, even though it’s St. Bona-Rhode Island. An NBA team blimp will be seen flying high above the court. Duquesne will sell out the PPG Paints Arena.

Maybe most annoyingly, a giant red and yellow Shanghai Bears video board will occupy the walls behind the baskets of certain gyms. This is because the arena was modded into MyLeague from the MyCareer mode. The Shanghai gym has an almost identical size and seating arrangement as the Reilly Center, so if you can get past the obnoxious video boards, you should have a good RC experience. I still think this is more realistic than playing Bonnies or Davidson home games in an 18,000-seat NBA arena or in a tiny high school gym, but if you'd rather have that, the great part is that you can make that call and change it yourself.

Ugh. Just try to ignore it.

Also, each specific season can host up to 36 teams, so you won’t have a 353-team universe to play within. You can include all 14 Atlantic 10 teams, and then pick up to 22 other schools out of a list of about 60 options to make a 36-team “league” of college schools. This also means that there won’t be a divided league and non-league season. Instead, you’ll have games against all the teams in the league at random throughout the year (unless you want to make a TON of trades to remedy this, which I’ve done).

Again, it’s an NBA game, so the playoff structure will also obviously not mimic March Madness. There are no auto-bids, no 68-team tourney, no rigged selection process (Tulsa?). However, there are ways you can get close enough to make it fun. By selecting 1-game playoff rounds, you’ll have the do-or-die scenarios. By putting all the A-10 teams in one conference like I arranged, the Eastern Conference Playoffs will essentially act as the Atlantic 10 Tournament (be sure to re-brand teams to my Barclays versions for this). Next, if you’ve won your side of the bracket, or think you’ve done well enough to garner an at-large bid (you’re now your own one-person selection committee, so obviously your team makes the cut), you can simulate a separate season with new teams and use the 1-game playoffs again to act as the Big Dance.

Here's a list of which NCAA rosters are paired with what NBA teams. You can find most of their jerseys and arenas under username "SkillazKill":

If you have questions about the roster or setup, feel free to message me on Twitter @SBUnfurled, and be sure to check back for future updates. Also, I'm not perfect, so if you see something that needs changed just let me know.

Since several people have asked, you may donate to the cause if you're feeling generous: Paypal - derekh3645@yahoo.com or Venmo - @howarddk

A Call to Arms for Bona Nation